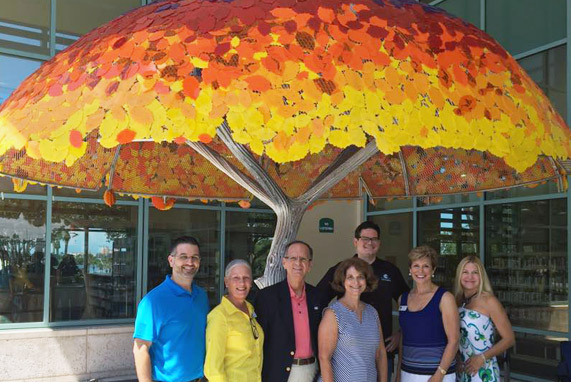 CAA is deeply committed to the arts and cultural community through celebrating public art commissions, both public and private, and recognizes the value of public art in our communities. CAA was instrumental in gaining passage of the Clearwater Cultural Plan of which the Public Art & Design Plan is a key element. Furthering that plan, Clearwater passed a Public Art Ordinance in 2006 and this law has components for public art funded by both city and private developers.

Public art is artwork that is in the public realm, regardless of whether it is acquired through public or private funding or a combination. Public art includes everything from more traditional art objects such as sculptures, painting, fountains, and mosaics to more functional elements such paving patterns, lighting, retention walls and railings that are created by an artist.

Clearwater is blessed with an active and growing public art collection. Click here to see a map that identifies all these sites, along with all galleries and performing arts venues. Many of these installations were funded by the City under the Public Art Ordinance, and some have been voluntarily commissioned by private developers. Several local businesses have enhanced our community by supporting public art by incorporating it in their developments. Shining recent examples are BayCare, Sandpearl Resort, and Opal Sands Resort. All have voluntarily commissioned public art pieces that bring beauty and value to their facilities. 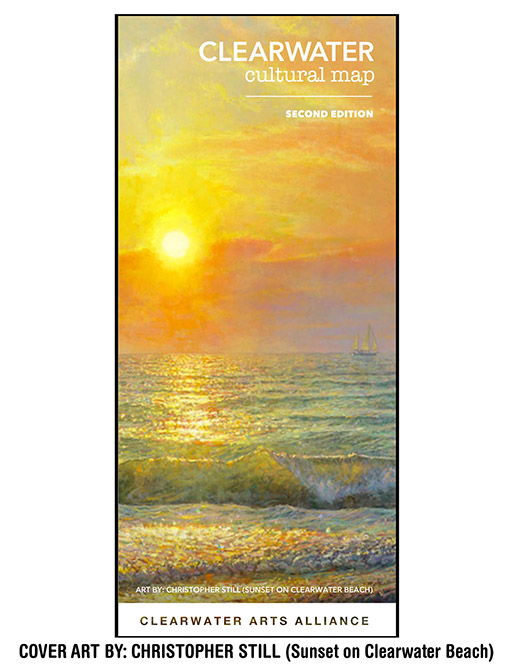 To further the Clearwater Arts Alliance (CAA) mission to promote art, culture and artists in our community, it researched, designed and printed a map to bring all performing art venues, galleries, and public art installations to your fingertips

Twenty thousand copies of the first edition were quickly snapped up while the arts continued to grow in Clearwater. The new edition contains all these updates to our cultural landscape. Thanks to our sponsors and advertisers, the map is free and allows you to find and contact any cultural site from one simple map. 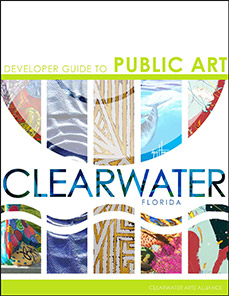 CAA recently completed a beautiful guidebook to help private developers understand the value of having public art in their projects and to assist them in following a process to bring a public art installation to fruition.

Public art is best exemplified in the relationship between art and space. The most successful public art installations not only inhabit the site in which they are placed, they enhance it through color, design, shape and texture. When commissioning pieces of public artwork, cities aim for a diverse collection of art. As such, installations will vary in medium and placement; some pieces may be interior, others exterior, but all are accessible to the public. 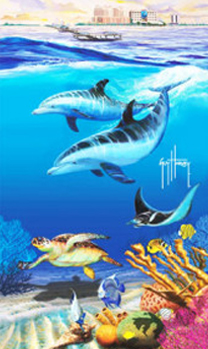 The mural, as long as a commuter bus, will be affixed to a curved metal sheet down the side of the newly opened Surf Style parking garage and swim shop, next to the Hyatt Regency resort. The underwater scene will face the beach.

Harvey, a Jamaican who lives in Grand Cayman, is best known for his T-shirt portraiture of marlins and sharks. The shirts have joined Croakies and boat shoes as high angler fashion. His artwork is displayed in exhibits, in sporting goods stores and at fishing tournaments. In addition to painting marine wildlife, he studies it: He holds a doctorate in fisheries management from the University of the West Indies. 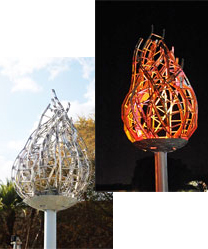 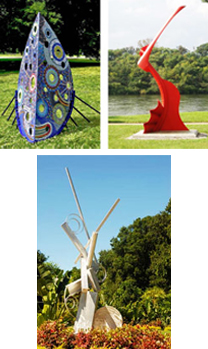 Art in the Cleveland Street District returns for a third season with artworks (shown in this order) by Nicole Beck (Chicago, IL), Ted Sitting Crow Garner (Chicago, IL), and local artist Clayton Swartz (Pinellas Park, FL). In a short time, the annual temporary sculpture exhibition has grown from a start-up program to a renowned competition, attracting over ninety entries by 36 artists from the United States and Canada and as far away as the Philippines. Exhibiting artists are chosen by a seven-member selection panel composed of professional artists and arts administrators, downtown business owners, representatives of the Downtown Development Board and city staff. Sculpture 360 – Season III is sponsored by a partnership of the Clearwater Downtown Development Board and the Clearwater Public Art & Design Program. 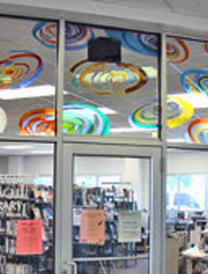 The newest piece of public artwork to be installed in Clearwater is “Color Droplets” by St. Petersburg-based artist Catherine Woods. Commissioned as part of the city’s Public Art and Design Program, “Color Droplets” was designed specifically for the Clearwater Beach Recreation Center & Library. The twelve multi-colored ellipses that make up the artwork feature colors that complement both the design of the facility as well as the natural beauty of Clearwater Harbor. 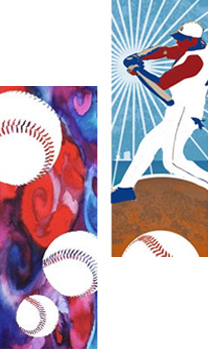 Each spring one of the city’s signature events is spring training baseball. 2009 was of special note as the city celebrated its 60th anniversary as the spring training home of the World Champion Philadelphia Phillies.

The Downtown Development Board and the city’s Cultural Affairs Division partnered to commemorate with baseball-themed artworks street banners.

Cultural Affairs sent out a call to artists in November 2008 requesting the sports-oriented designs with the stipulation that none contain identifying elements such as logos or recognizable team names. The banners were on display from February to April 2009 and celebrated the return of Spring Training baseball.

Further details are available by calling Clearwater Cultural Affairs at (727) 562-4837. 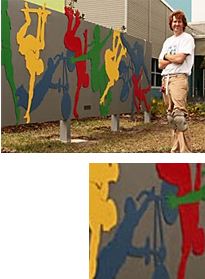 The City of Clearwater Parks and Recreation Department dedicated a public art sculpture entitled “Risk” on Wednesday, May 17, 2006 at Ross Norton Recreation Complex.

Margo Walbolt, Clearwater’s Cultural Affairs Manager said, “Public Art is a crucial element in the creation of successful public spaces. It provides the vital ingredient of ‘fun’. This sculpture’s colorful extreme sports figures alert us that we are about to enter an exciting place.” 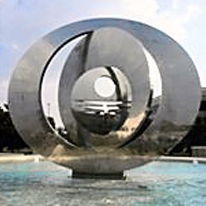 One of the goals of the Cultural Plan was the creation of a citywide Public Art and Design Program. The Program is designed to enhance the look of the City through high quality works of art and design, which create a sense of place and increase the quality of life for residents and visitors alike.

On October 6, 2005, after nearly three years of research and advocacy, the Clearwater City Council approved Ordinance No. 7489-05, creating the Clearwater Public Art and Design Program. The Clearwater Arts Foundation and city staff researched programs from as far away as Portland, Oregon, and closer to home with Broward County, Hillsborough County, Miami-Dade County, and Pinellas County.

Dedicated on Armistice Day, November 11, 1927 the Doughboy and Sailor, as they came to be known, began their 75-year tour of duty at the entrance of the Memorial Causeway Bridge. The statues were donated to the City and dedicated by American Legion Post 7 in memory of 38 local war heroes who lost their lives while serving in World War I.

Created in the early 1920’s by sculptor E. M. Viquesney, the statues are hollow and have a structure similar to that of the Statue of Liberty. The body of each statue is made of sheets of a copper/bronze alloy that was joined together to form the body, and are as thin as a penny in some places. The Doughboy, which took two years to complete, won an American Legion national design award in 1921 and is considered to be Viquesney^s greatest work.

memorial-statue2The Doughboy and Sailor were removed from their site in 2002 in preparation for the construction of the Memorial Causeway Bridge. During their absence, the statues were fully restored by sculptor Frank Colson of Sarasota, and were re-dedicated on November 10, 2006 to commemorate their 79th anniversary. Addition to the statues are a flagpole, historical maker, lighting and landscaping as well as two new pedestals that will elevate each serviceman to a total height of over 16 feet.

An exhibition of artwork by architectural glass artist and Clearwater resident Ulli Kampelmann is currently on display in the lobby of the Municipal Services Building, 110 S. Myrtle Ave., Clearwater. Ms. Kampelmann gained her fame in Germany by creating public artworks that are exhibited in Berlin, Esslingen, Karlsruhe and Stuttgart. The 12 pieces of stunning glass are on an extended generous loan by the artist.

What is Public Art?

Public art is artwork that is in the public realm, regardless of whether it is acquired through public or private funding. Public art can include anything from more traditional art objects like sculptures, paintings, fountains and mosaics to manhole covers, paving patterns, lighting and other functional elements created by an artist.

Why have Public Art?

Communities through the country have been using public art for decades to create a sense of place and improve the quality of design of buildings and private developments, streetscapes and public places. As a result, public art has been integrated into the daily lives of citizens from cities around the country including Seattle, WA where artists have designed manhole covers, fountains, benches and tree grates to Miami, FL where artists recently completed a sound wall for a highway that is both functional and aesthetically pleasing. Public Art creates a strong feeling of identity, which results in an increased amount of tourism and economic development.

There are approximately 350 municipalities with public art programs in North America that actively commission artist to create public art for all types of public infrastructure. Some cities, where art in public places is plentiful, have become known as “museums without walls” as their artwork has become so accessible to citizens and visitors.

How is Public Art Funded?

The Clearwater Public Art and Design Program is funded by Ordinance No. 7489-05 that requires that 1% of the aggregate job value (AJV) of City capital improvement projects (CIP), valued at $500,000 and above, is dedicated to the purchase and installation of on-site public art. A similar requirement exists for private development projects with an AJV of $5 million and above. Under the Public Art Ordinance, eligible private developers must either allocate 1% of their project’s AJV towards the purchase and installation of on-site public art, or must contribute 0.75% of the project’s AJV to the City’s Public Art Discretionary Fund, which is used to supplement the public artwork of City CIP projects and to commission artwork that is not linked to a CIP.

Where can I learn more about Public Art?

For more on public art or the Clearwater Public Art and Design Program, contact Christopher Hubbard, Cultural Affairs Coordinator at (727) 562-4067 or through e-mail at christopher.hubbard@myclearwater.com.